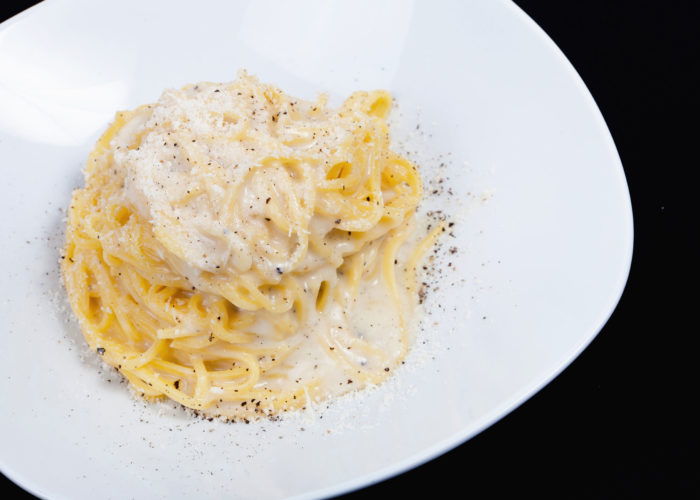 Whenever one thinks of Rome, most likely the first images that spring to mind are St. Peter’s, the Colosseum, the Pope and most probably cacio e pepe as well!
This dish is one of the cornerstones of the Roman cuisine, maybe even more so than the Amatriciana, Gricia and Carbonara, its tradition being of such long standing and rooted in the Roman countryside.

The cacio e pepe was actually created by shepherds who, when seasonally having to move their herds around, filled their bags with simple, but nutritious food ingredients which would provide them with the right amount of calories during their country life as a shepherd. Pepper is a spice which activates a body’s heat receptors resulting in feeling the cold less, whereas pecorino was always present as a nutrient for shepherds as it provides energy and proteins. Obviously, pasta was part of the food provisions, no Italian can do without.

In fact, pasta, pecorino and pepper are the only ingredients of this famous dish, however, its preparation is anything but obvious.
A lot of experience is needed to make this dish become a masterpiece, with its delicious creamy sauce (cremina) which sticks so well to the pasta and creates this explosion of flavours in your mouth.
As a matter of fact, the secret lies within the creaming and blending of the ingredients and the correct timing and use of a bit of cooking water in order to melt the pecorino without it becoming grainy or lumpy.
When choosing which pasta to use, spaghetti surely is a good and probably the most authentic choice. However, nowadays, tonarelli and rigatoni have also become part of the official recipe.

Every typical restaurant in the Italian capital has this delicacy on its menu and just about every single Roman will be able to advise you on which trattoria will serve “la mejo de Roma”(slang for “the best in Rome”); it’s up to you to try them all and decide which cacio e pepe tops your list. Be aware of one thing however, neither butter nor cream should be used, as that will never be a real cacio e pepe!

We will gladly pick up the gauntlet, because we know that our cacio e pepe is something very, very special. We will serve it on a silver plate…., no, on a Cacio plate!

Whenever one thinks of Rome, most likely the first images that spring to mind are St. Peter’s, the Colosseum, the Pope and most probably cacio e pepe as well! This dish is one of the cornerstones o

An invitation to an event always brings about a more or less difficult question: what is the appropriate way to dress? Up to and until a few years ago, stricter rules regarding dress code for specific

Organizing a wedding usually brings about quite a lot of stress for the couples involved. They will have to organize a complex event, while incorporating this into their working- and private lives. On

THE 5 FUNDAMENTAL STEPS IN ORGANIZING AN EVENT

We are all used to having the agenda full of events, for work or for fun, they are part of many people's lives. Sometimes the experience is pleasant and engaging and at other times we wished to have s